Honestly, I didn’t really ever aspire to write a serial killer book. I felt like it would be hard to compete with the specialists and that the research would be kind of depressing. My publisher was hinting less than subtly though, so I told them that I’d do a serial killer book if it wasn’t really about a serial killer. Just a bunch of mumbo jumbo to get them off my back, really.

Wouldn’t you know that a week later I woke from a sound sleep with an idea for a serial killer book that wasn’t about a serial killer? What if there was a murderous psychopath who was so important to the government that they would actively cover up his crimes? And what if a young computer programmer working on the FBI’s DNA system found out about the conspiracy?

I have to admit that this book turned out to be fun to write. It’s a lot less complex and probing than my other novels, but the pace flies and it has some good characters. A lot of people told me they finished it in a day, which was my goal—a straight-ahead, can’t-put-it-down thriller.

In retrospect, though, I wonder if I should have written it. Being a ‘sophisticated’ thriller writer is kind of like being a gifted high school student. If you write a really good paper, your teacher gives you a C and tells you she expects more from you. Then she gives the jock behind you an A for his beer-stained dissertation on the joys of nachos. I felt like Burn Factor was an interesting twist on the genre (not reliant on one-upping the competition with ever more gruesome dismemberments) and pretty well researched. Many of my fans considered it too ‘light’ and too violent, though. And worse, I got some nasty letters from readers who felt I was promoting violence against women and portraying them as victims, despite the fact that the protagonist of the book was a very strong female character. People even started asking my wife if she was afraid to live with me. So, in short, Burn Factor was my first and last foray into this genre. Secretly, though, I still like the book.

He was beautiful—there was no other word for it. Smooth unblemished skin, full lips and white teeth framed by long, dark hair that shined in the fading sunlight coming through the windows. Had he learned to use his physical appearance to draw in his victims?

“Ms. Barry? Can I get you a drink of water or something?” he said.

She smiled reassuringly. “I’m sorry. Thank you, but I’m fine. So are you an artist or a physicist?”

“There’s no real difference.” When he laid the knife down on the table next to him, Quinn took a step forward. The carving on the top wasn’t complete enough to be identifiable yet, just a collage of graceful lines.

“Just to confirm that this is still your primary address and to open a line of communication.”

“A line of communication,” he repeated. There was no curiosity in his voice, just an increasing melancholy.

“Yes, sir. Based on some new evidence, we’re going to be actively looking into the death of your assistant Lisa Egan again.” She examined his reaction carefully. Someone smart enough to get a Ph.D. at thirteen would be smart enough to know that this kind of direct involvement by the FBI might mean that Egan’s death had been connected with the deaths of other young women.

“You want the killer brought to justice don’t you?” she said when he didn’t respond.

He wouldn’t look at her, instead staring over her shoulder at the back of the room. “The killer. That’d be me, wouldn’t it? The maladjusted little freak who turned on the woman he was sleeping with. Cut her throat from ear to ear for no reason. Listened too carefully to the voices in his head, right?”

His mouth curled up a little but she wasn’t sure she’d actually describe it as a smile. “You’ll excuse me if my ten years dealing with people like you makes me doubt that.”

“You lied about your relationship with her,” Quinn said.

He suddenly looked even more distant, like he was slowly falling into himself. “I did do that. I lied.”

Quinn found it impossible to tear herself away. She was captivated—by him, by the danger he represented. It was like looking at a predator in a zoo, but without the bars. “May I ask why?”

She could almost see pain in his eyes. An amazing illusion.

“Lisa was a friend to me when I needed one more than anything. But she wasn’t comfortable with our relationship being public—I was still pretty young then. In fact, she used to joke that it wasn’t even legal in Maryland. Anyway, she was dead. I decided to respect her wish that our relationship remain between us. And because of that, the cops arbitrarily decided that the person I was with when she died was lying and marked me a killer…” his voice trailed off for a moment. “I’m not sure why I told you that.”

“Is that why you live out here?”

“I tried other places—back when I thought I could still have a life.” He eyed her accusingly. “But no matter where I went, somehow people found out about my past.”

He nodded. “Renquist and your colleagues have made sure of that.”

Quinn recognized the name of the Baltimore cop who had headed the investigation into Lisa Egan’s death. As near as she could tell, the FBI’s involvement had actually been minimal—nothing more than a little consulting.

He folded his arms on his chest and leaned against the wall behind him, obviously trying to decide whether or not he wanted to continue to participate in her little interrogation. Quinn was starting to think she’d pushed it too far when he finally answered.

“I still work for Hopkins. I don’t teach anymore, of course. We have an understanding: as long as I continue to provide them with interesting math and I don’t get within a mile of their campus, they continue to pay me. We mostly communicate through email.”

“I see.” She reached under her sweater and pulled out a small pad, making a show of jotting down a few notes. “Well, thank you for your cooperation, Mr. Twain.”

“Do you mind if I use your bathroom before I leave? I’ve got kind of a long drive.”

He shrugged and pointed to the far corner of the room.

“Thanks,” she said, trying to look natural as she backed away far enough to feel comfortable turning away from him.

When she got into the bathroom, she locked the door and sagged against it, suddenly drained of energy. She took a few deep breaths and told herself over and over how well she was doing—the performance of a lifetime. When she’d calmed down a little, she moved to the sink and, thanks to the length of Eric Twain’s hair, easily found a few samples with good follicles still attached.

She stuffed them into a small plastic bag and tucked it into the waistband of her skirt before flushing the toilet. Her hand wasn’t even on the doorknob when the incredibly vivid image of Eric Twain standing just outside with a couple of coat hangers and his carving knife filled her mind. She froze for the second time that afternoon, feeling her heart pounding in her chest.

She went back to the sink and splashed some water on her face. Her eyes looked a little bloodshot in the mirror as she dabbed her face dry.

A quick search of the bathroom yielded nothing she could use to defend herself that was more deadly than a hairbrush. Finally, she just walked up to the door and jerked it open. 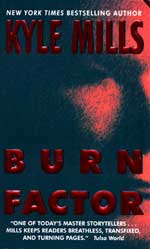 Bright, young, and ambitious, Quinn Barry desperately wants to be an FBI agent, even as she programs databases in the basement of the J. Edgar Hoover building. But Quinn’s career—and her life—are about to change wildly. Testing a new program, Quinn’s computer savvy turns up a mysterious DNA link among five gruesome murders. A link that the old FBI system had been carefully programmed to miss. A link that nearly costs Quinn her job, and soon, her life.

Pitted against a conspiracy of unimaginable proportions, Quinn is determined to uncover what someone very powerful wants to keep hidden—dark, dirty secrets involving high levels of government. She turns for help to her boyfriend, an ambitious young CIA agent, only to flee to protect herself and, she hopes, him. Finally an ally emerges from the most unlikely place of all, and with his help Quinn will at last turn the tables on her shadowy assailants—and land herself in the clutches of a sadistic, brilliant madman who holds the key to it all.