Another year, another book tour. Thanks to everyone who came out to say hello and to everyone who’s continued to support me and the series. And, of course, a huge thanks to the bookstores that hosted signings. Without you, connecting with fans face-to-face would be impossible.

As always, I had a lot of fun making my way across the country to meet readers, signing copies of Lethal Agent, and talking about my backstory. If you weren’t able to make it to an event, here are some highlights of my two weeks on the road.

Finally, if you missed out and still want a signed book, give one of the event bookstores a call. VJ Books also sells signed copies.

Since Vince lived in the Minneapolis-Saint Paul area, the Twin Cities continue to be the traditional place to kick off the tour. I always begin my first day with a live in-studio interview with the popular KFAN host, Dan Barreiro. Then it’s off to Barnes & Noble in Roseville—the first bookstore that said YES! to Vince when he asked if they’d sell his self-published book. I emptied several pens there. This year, Barnes & Noble is offering an exclusive edition that includes an extended Q&A with how I prepared to take over the series and more. Photo: @VinceFlynnFans

Day 2 means Once Upon A Crime—a great little indy shop in Minneapolis that has long supported the Rapp series. After leaving Minnesota, I always stop to see longtime friends like Poisoned Pen and Murder By The Book, and make new friends at venues I’ve never visited before. Here are links for all the 2019 event bookstores.

One of my favorite parts of the job is chatting with radio and podcast hosts who are passionate about books as well as reviewers who cover all things thriller. Next month I’ll post a comprehensive round-up of tour interviews and reviews in case you missed any of the conversations.

One of the newest podcasts on the book scene is The CREW Reviews. I had a terrific time on their show. The four hosts are also writers.

Ryan Steck has cultivated a rabid following of thriller fans who are looking for must-read recommendations and the inside scoop on their favorite authors. The Real Book Spy always delivers the goods. Here’s this year’s 5 Questions With Kyle Mills interview.

Hugh Hewitt, radio host and longtime friend of Vince’s, invited me onto his show to discuss the new book in three short segments: Part 1, Part 2, and Part 3.

Fans Are The Best

This year, there were quite a few Rapp Ambassadors and writers in the crowd along with old friends like super fan @VinceFlynnFans, book reviewer/editor LimaCharlieEditing&Reviews and his wife, and my firearms consultant and his better half.

It made me smile to see so many excited readers cheering Mitch on for another year. I was also glad to meet some fans who, until now, I’ve only known from their online profiles. As usual, there’s a lot of funny content that swirls around when a new book is released. This is David Brown, the bus driver over at @AtriaMysteryBus. 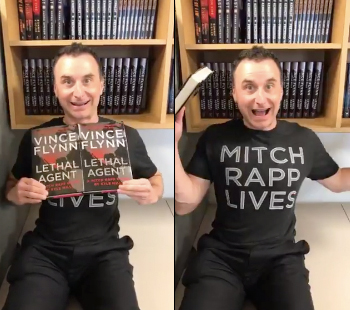 What should we call the day when a new Rapp book drops and you’re too “sick” to go to work? Rappbatical? Leave of Rappsense? Rappoliday?

Novelist Jack Carr had the book in hand when he was grounded by a storm that was ramping up in Alaska. The Smoky Poet launched a scavenger hunt that had followers guessing where he was reading Rapp. This is the first time I’ve been compared to Van Halen’s post-David Lee Roth frontman Sammy Hagar. I have no words.

We writers wait anxiously while sales are compiled to find out if our latest book will hit the NYT bestseller list. Well, Lethal Agent had an incredible first week, debuting at #2 on the combined hardback/e-book list, #4 on the hardback list, and #7 on the October audiobook list. And, if that wasn’t exciting enough, Red War was on the October mass market list at #3. A million thanks to everyone for the ongoing support, kind reviews, and warm wishes during my book launch this year. Until 2020…

Curious about the extensive research that went into writing Lethal Agent? Get the scoop here…

The predictions business has been pretty good to me this year. Several of my novel concepts have hit the news cycle and, in the case of the Russia-Ukraine … END_OF_DOCUMENT_TOKEN_TO_BE_REPLACED

Once a year I like to take stock of what I’ve done over the past twelve months. Sometimes it’s hard to quantify what I’ve accomplished but that’s not true with … END_OF_DOCUMENT_TOKEN_TO_BE_REPLACED

These days, book tours involve a combination of in-person events, radio segments, and one of my favorite forms of media, podcast interviews. In case you missed … END_OF_DOCUMENT_TOKEN_TO_BE_REPLACED

Oath of Loyalty has been on shelves for more than two months now, and I just recently … END_OF_DOCUMENT_TOKEN_TO_BE_REPLACED