Post updated to include Red War cover and additional book sellers on April 30, 2018.

Mitch will be back in October with another do-or-die mission! This time he’s operating in Russia—unfamiliar territory held in the iron grip of President Maxim Krupin, a ruthless character I introduced in Order to Kill. Will Rapp succeed or come home in a body bag? Find out in a few months! 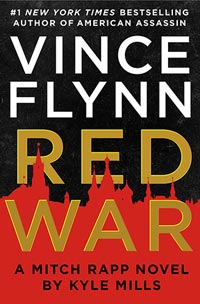 When Russian president Maxim Krupin discovers that he has inoperable brain cancer, he’s determined to cling to power. His first task is to kill or imprison any of his countrymen who can threaten him. Soon, though, his illness becomes serious enough to require a more dramatic diversion—war with the West.

Upon learning of Krupin’s condition, CIA director Irene Kennedy understands that the US is facing an opponent who has nothing to lose. The only way to avoid a confrontation that could leave millions dead is to send Mitch Rapp to Russia under impossibly dangerous orders. With the Kremlin’s entire security apparatus hunting him, he must find and kill a man many have deemed the most powerful in the world.

Success means averting a war that could consume all of Europe. But if his mission is discovered, Rapp will plunge Russia and America into a conflict that neither will survive.

Ryan Steck recently posted  a great recap of the Mitch Rapp series to help orient new readers. I’ll talk more with him about Rapp #17 later in the year.

Head on over to these retailers and reserve your print edition, unabridged audio, or e-book now. Amazon, Barnes & Noble, Books-a-Million, Audible, and Google Play.

The predictions business has been pretty good to me this year. Several of my novel concepts have hit the news cycle and, in the case of the Russia-Ukraine … END_OF_DOCUMENT_TOKEN_TO_BE_REPLACED

Once a year I like to take stock of what I’ve done over the past twelve months. Sometimes it’s hard to quantify what I’ve accomplished but that’s not true with … END_OF_DOCUMENT_TOKEN_TO_BE_REPLACED

These days, book tours involve a combination of in-person events, radio segments, and one of my favorite forms of media, podcast interviews. In case you missed … END_OF_DOCUMENT_TOKEN_TO_BE_REPLACED

Oath of Loyalty has been on shelves for more than two months now, and I just recently … END_OF_DOCUMENT_TOKEN_TO_BE_REPLACED